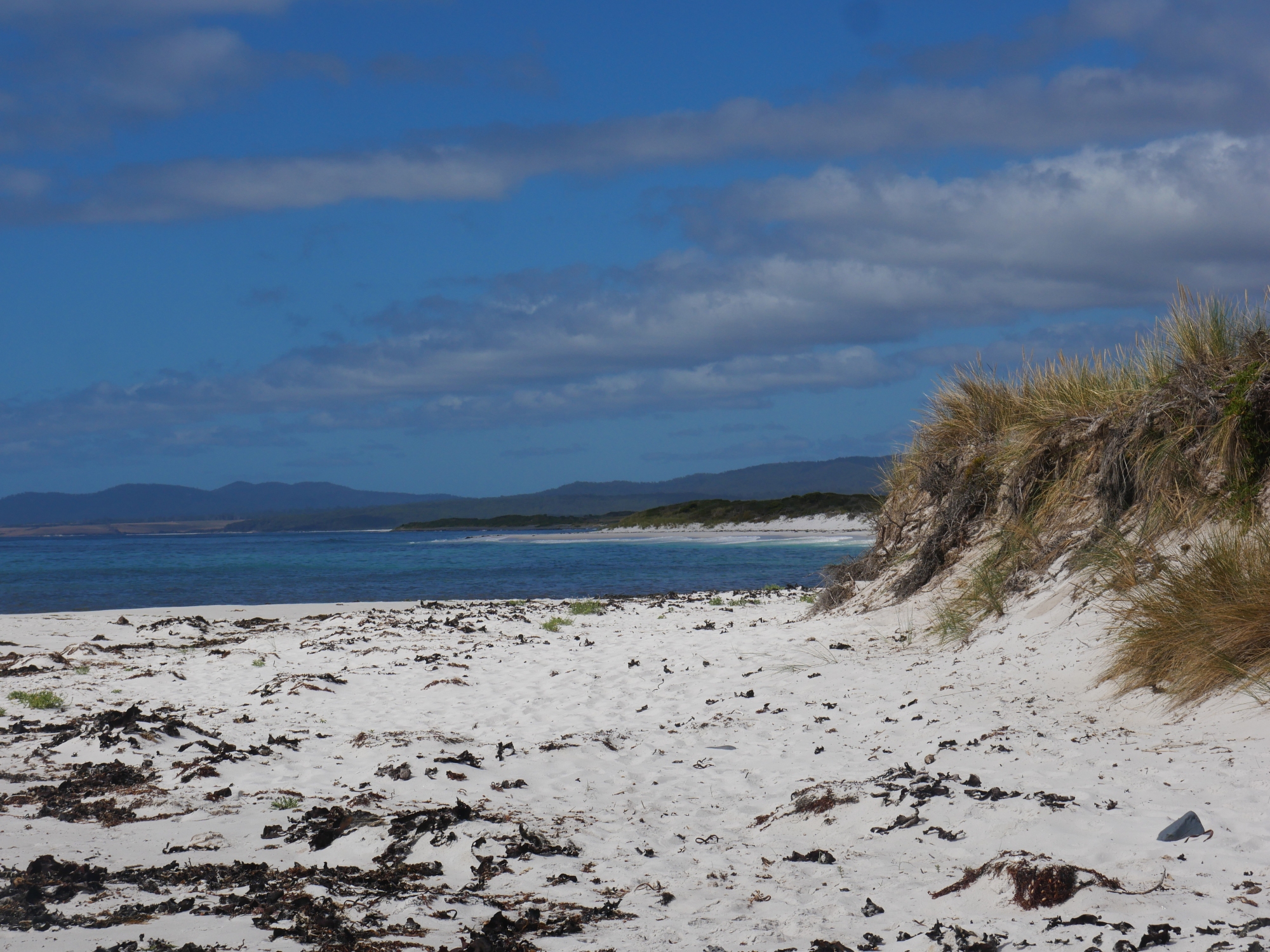 It is fair to say that we had been very comfortable at our temporary home in Burnie. The tent had remained packed up in the car for the longest time since we left Brisbane. The end of our time with a solid roof coincided with an improvement in Tasmania’s weather so returning to canvas didn’t seem so bad and we had four days before we needed to be back in Devonport for the ferry.

So we headed east to a free camp at Policeman’s Point on the Bay of Fires which came highly recommended by a French/British couple we had met on the Mornington Peninsula. We stopped on the way in Exeter in the foodie Tamar Valley for a posh (read expensive) breakfast and again for fuel in Bridport on the north east coast. We warmed to Bridport immediately. They had named a street after me for starters but on a clear sunny day the blues of the shallow waters were stunning. We continued east, however, on the longest stretch of unsealed road we had been on since the Darling River. All the vibrations worked the nut to the UHF aerial loose again so Stefan needed to do another quick repair on the roadside. Arriving at Policeman’s Point we found an excellent large spot right opposite the beach and pitched the tent for the first time in three weeks.

The Bay of Fires has been named the world’s best beach by the Lonely Planet and it is undoubtedly one of the most remote and unspoilt we have seen.

The Bay of Fires is incredibly photogenic and it is beautiful but we have had the good fortune to visit many contenders for the world’s most beautiful beach and its a tough call whether it even makes it into our top 5 in Australia.

It was, however, a wonderful place to spend a couple of days after all that time in a town and with the beach a 1 minute walk from the front of the tent we explored it at all states of tide.

We didn’t quite have it to ourselves but the sea birds definitely outnumbered the humans. It was good to see pelicans again too. It had been a while!

The only litter on this beach came directly from and of the sea. Beautiful long, glossy strands of sea weed contrasted with the bright white sand and this giant blob of jelly fish did its best to camouflage itself on it. It was refreshing to find footprints were the only thing left behind by humans.

A diversion from the gravel roads took us on a real 4WD track through a forest to Anson’s Bay. Tick took it in his stride, bumping down the boulder strewn path. Road signs promised Tasmanian devils but our closest encounter was with a runaway calf.

North of Anson’s Bay, at the start of the Bay of Fires, we visited Eddystone Point Lighthouse. It was opened in 1889 but this is Larapuna Country and the local Aboriginal people lived and fished here for many thousands of years before that.

It was also easy to see here how Tasmania was once joined to the Australian mainland at Wilson’s Prom from the same orange tinged granite rocks we found at Eddystone Point.

We decided that we had liked the look of Bridport enough on our way through to stop there for the night before returning to Devonport. As we were making plans we heard the news that someone we had met on our European sailing travels had just got off the ferry at Devonport and we quickly hatched a plan to catch up with him at Bridport.

On the harbour wall in Sitia, on the northeastern tip of Crete, we had met Nigel, an Australian who was cycling through Europe as part of an epic cycle all over the world. We had shared only an hour or so with him over some cups of tea on Pintail chatting about our respective travels and we had kept in touch with him via Instagram as he conquered Europe and went off to the Far East. There we lost touch with him and hoped he was OK. Then, just as we were hatching the plan for this trip we heard from him again. Unsurprisingly perhaps after over 85,000km on his bike he was in need of a new hip and had returned to Australia. That was not going to stop his adventures though. He had just swapped his pushbike for a motorbike and embarked on a lap of Australia. His posts on Instagram have inspired much of our own route but he had always been just that little bit too far away to catch up with him.

Now we were only a couple of hundred of kilometres apart and meeting up was definitely on the cards.

We wasted no time in catching up on our respective last two years of adventures over a shared meal and more wine that we should really have drunk. As we chatted into the night, this was definitely the first time we got told off for making noise too late in a campsite!

We woke in the morning with sore heads and a need for caffeine which, after packing up our tents, extended our reunion for another hour or so before we had to go our separate ways again – Nigel to start his tour of Tasmania and us to finish ours.

We hoped we might see him again when we pass through his home town of Coffs Harbour in February but if not we just know he is one of those people we will meet at random, somewhere else in the world and pick up just where we left off…

One thought on “Back in the tent”