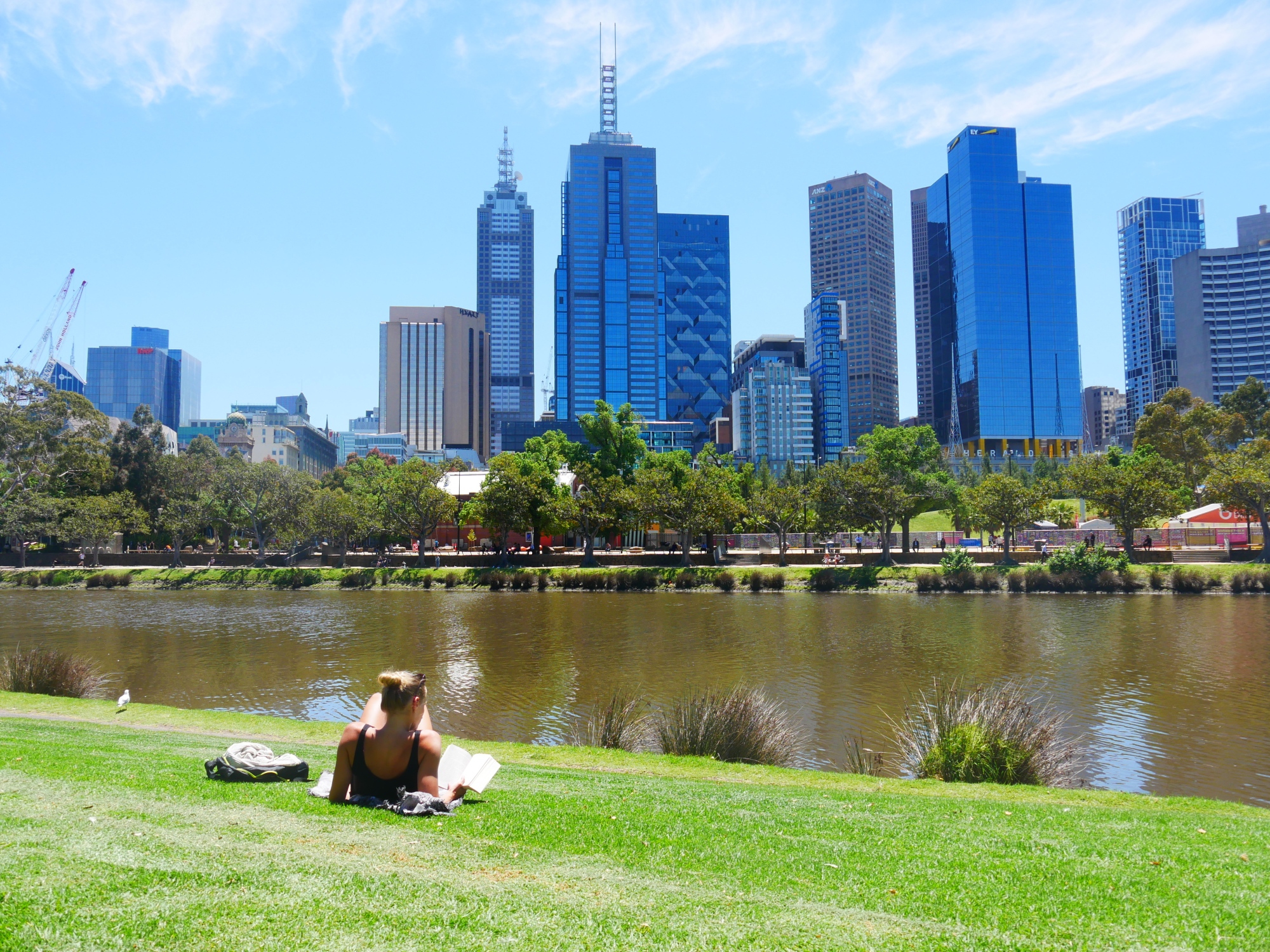 It is a cliché, even enshrined into pop culture by Crowded House, that in Melbourne you will experience four seasons in one day. We were hoping for more Spring and Summer than Autumn and Winter after the week we’d had but we were going to have to wait!

A little overwhelmed by being thrust into a big city after so much open space, we decided to take the hop on hop off bus as an introduction to Melbourne’s busy streets. A two day ticket allowed us to take two different routes through the city’s main sights.

For our taster afternoon it was decidedly autumnal on the open top bus on our first route which took us out to St Kilda, Melbourne’s beach front. My excitement at passing the building renovated in reality TV show The Block (which I had become addicted to during ‘flu recovery in Brisbane!) kept me warm on the top deck and we got off for a walk down the beachfront, stopping for fish and chips for lunch. It was windy enough for the dinghies to be out at the sailing club. It had been a fresh introduction to the city and we hoped it would warm up to enable us to explore it more in the following two days.

For our first full day in the city, our second bus route was accompanied by the kind of freezing winter like temperatures that were not at all conducive to sitting still on the open top deck and we have to admit to giving up halfway through and seeking warmth and a bowl of noodles in Chinatown! The icy, overcast weather did not show off the city at its best.

But we awoke the next day to clear blue skies, bright sunshine and, best of all, warmth. For our second full day it felt like we’d skipped spring and headed straight into summer and that gave us the opportunity to wander along the river and around Melbourne’s lovely parks without our toes freezing.

The Yarra River cuts a gentle path through the high rise towers of the city. Its muddy brown colour has earned it the description of “the river that runs upside down”. It reminded us of the River Crouch back in Essex where we have spent so much time. We were very fond of its muddy waters.

A long, slow wander in the heat through the tranquil parklands of Kings Domain revealed memorials to, amongst many others, the monarch who gave her name to the State and the more ordinary early European settler women who perhaps contributed rather more than their Queen to its building.

By now I have realised that Australia loves a war memorial. No matter how small the town there will always be one, usually accompanied by a German gun. In Melbourne, however, they took the humble war memorial to an entirely different level! Built on an epic scale and in an incongruous Classical style, the Shrine of Remembrance momentarily took us back to Greece.

Underneath the Shrine’s impressive vaulted hall, Veteran volunteer Merv explained the significance of the Battalion Colours that hang in the crypt, retired there only when they have almost fallen apart.

The permanent exhibits remember the men, women and animals of conflicts around the world on all sides. Stefan was anxious that we not linger too long as he had high hopes for the national Australian War Memorial when we get to Canberra.

Amongst all the relics of war, there were calls for peace and remembrance and, it being so close to Remembrance Day, there were walls of knitted poppies, some of which had escaped to the statues outside.

We had been staying in Melbourne with my friend, Julia and her husband Bill. She had urged us to visit the city’s laneways and have a coffee and we just couldn’t return home again without having been. Melbourne makes some pretty wild claims about having the best coffee in the world. We have drunk a lot of coffee in Italy and Greece over the past 3 years where they take it very seriously indeed. So perhaps we’ve been a bit spoilt. Melbourne’s coffee is definitely good but then I don’t think we’ve had a bad one anywhere in Australia.

Perhaps we have also been spoilt by spending so much time in wide open spaces and tiny towns but we found being in the big city a bit overwhelming and probably didn’t get the best out of it. However, three nights in Melbourne gave us the opportunity to spend time with Julia and Bill at the best B&B not just in Mount Waverley or even Victoria but probably all of Australia. We enjoyed three wonderful evenings of chatting over meals followed by chatting over Bill’s incredible hedgehog cake (one slice is never enough!) followed by more chatting until very late.

Thank you Julia and Bill for your hospitality and great company and for planting our respective motivations to pull on the running shoes and pick up the knitting needles again.